Please note that these are all personal phone numbers.

There is no phone in the church.

A brief history of St Stephen’s Church
In the 16th Century the population of the whole of the ancient Parish of Claines including the Tything was 328. By the time of the consecration of the Church of St Stephen on 22nd August 1862 this figure is recorded as being slightly under 10,000 of which some 2,000 were living within the Barbourne district.

The Church was built upon land given by Miss Lavender and Mrs Gutch, her sister, who lived at Barbourne House. This was a substantial residence constructed in the Georgian style and located on the north-eastern side of Gheluvelt Park. The site is now occupied by some of the former soldiers' homes that run parallel to Lavender Road. From January 1863, Barbourne House was occupied by the first holder of the office of churchwarden - Rear Admiral Hastings. It is interesting to note that one portion of the drive forming the circular access turning area adjacent to the House can still be seen in the form of a semi-circle in front of the row of large houses in Lavender Road. The drive leading to Barbourne House was subsequently known locally as “Admirals Walk", in recognition of the Admiral's habit of frequently walking up and down the drive, as if still pacing the quarter-deck of a sailing ship, which he had done so many times prior to his retirement from the navy. 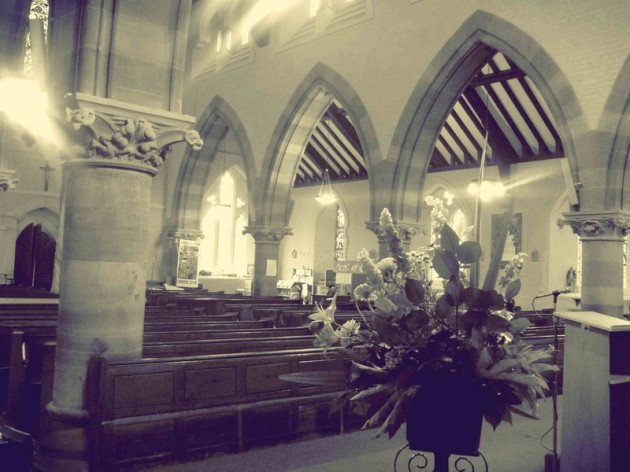 The Bishop of Worcester consecrated the Church on the 22nd August 1862 with Thomas Gale Curtler being appointed its first incumbent, but it was not until January of the following year that the first wardens, Rear Admiral Hastings and Mr Henry Emery were appointed. The Church day school opened soon after on September 22nd 1864.
At this time the district north of Barbourne had a distinctly rural appearance. Lying as if did then, outside the City boundary, it contained comparatively few houses. Fields and market gardens stretched away on either side of the unpaved main roads leading to Droitwich and Ombersley. A fine and uninterrupted view of the Malvern Hills could be observed by the few who already lived along Ombersley Road, but with the expansion of the City this was to come to an end. Indeed in the Parish Magazine for September 1885 a contributor, referring to the erection of houses along Ombersley Road, deplored the loss of this fine view.
Parishioners became accustomed to seeing Rev. Curtler arrive on horseback from his residence at Bevere House. Due to the Church's close proximity to the Toll Gate lending into the City, the Rev Curtler may have used the stabling facilities of the Hop Pole Inn on the east side of Ombersley Road. A section of the garden of this establishment (which closed about 1870) led up to a footpath between the Ombersley and Droitwich roads - what is now St Stephen's Street. Similar facilities appear to have been available at the Barbourne Inn, and yet another early inn located close to the Church was the Crown Inn - this was located on the east side of Droitwich Road (possibly on the site of the Barbourne Health centre). Bevere House was to remain within the ownership of the Curtler family for nearly another 100 years.
By the late 1870’s a large number of the parishioners were becoming increasingly concerned about the poisoning of drinking water supplies by sewage. A petition was presented to the City of Worcester requesting that the Barbourne district be Incorporated. However, it was not until 1885 that the parish of St. Stephen's was so incorporated. 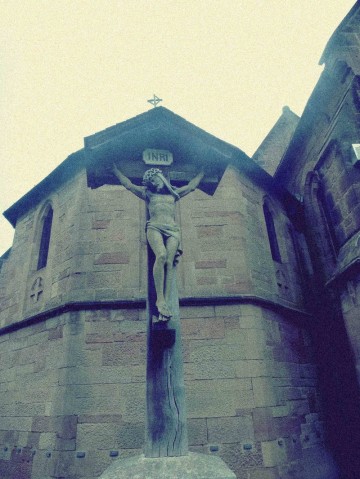 Social and sporting activities made an early impact in the parish. As early as 1882 there appears to have been a well organised cricket club. The club was originally known as Claines C.C. but because of possible confusion with the adjoining parish, the name was soon changed to Barbourne C.C. The club enjoyed an enviable reputation throughout the City and continued to flourish for almost 100 years. The Rev F Crowther (Curate of St. Stephens 1881-84) was one of its first Captains. The close ties of the Church with the adjoining day school are seen recorded in activities of the St. Stephen's "Drum and Fife Band". This made its first appearance at the Whitsuntide School Treat held at Blanquette’s Park in 1880. Indeed during Christmas week of 1883 the Band marched to the Vicar's House at Bevere and entertained the assembled company. Sadly by 1885 the Parish Magazine is obliged to report "Our Band, having passed of late through some weakening vicissitudes, was not at its best."

As is the case now, our forefathers were faced with maintenance problems and early Magazines make reference to Church Heating, Special Fund for Church Repairs, cleaning and repairs to organ. Not withstanding the Church continued to grow and it was during the ministry of the Rev Sheppard that the Vicarage was built.
The sudden death of the Rev Sheppard in 1898 brought to St Stephens the Rev C Hopton. He introduced a number of alterations to the internal Church fabric including a new oak front to the Organ, a new entrance to the Vestry and the relocation of the font to the tower baptistery. His energies and abilities were soon recognised in wider circles, and in 1907 he was offered the much larger living of Mosely in Birmingham. He was later to become a Canon and then Archdeacon of the Diocese of Birmingham.
Fr W Ford took up a ministry that would last for 25 years. During this time electric lighting to the Church was introduced in 1912, a new Vestry formed in 1914 and most significantly, the construction of the Lady Chapel dedicated in 1916. The need for a Parish Hall soon became apparent. A Grand Bazaar was held in the Public Hall in 1925, but even greater calls were made on the Parish and work was held up by the Diocesan Appeal for Church Schools in 1929 and for funds to permit the renewal of "the Church Heating Apparatus" in 1930. What would now be regarded as a very Anglo-Catholic form of worship was encouraged by Fr Ford. This appears not to have met with the approval of his Bishop, indeed for the last nine years of his ministry he was unable to have a curate licensed because he held fast to the old Church Law principle of Reservation of the Blessed Sacrament by the parish priest for his people. During this time the Bishop never visited the Church or held a Confirmation in it.
In July 1932, Fr Ford announced his exchange of livings with Fr Morris of St. Juliot’s, Boscastle, Cornwall. His ministry started with the opening of the Parish Hall in November. Church life in the ‘30’s took on a new lease, especially with the social amenities of the Parish Hall. The Second World War brought its inevitable problems to parish and its priest but despite this, congregation numbers held up well. Sadly 1940 saw responsibility for the management of the day school pass into the hands of the local authority. Victory in 1945 brought about a reaction of some indifference towards regular Church attendance. The hard winter of 1947 coupled with a lack of fuel to heat the Church meant that only the most dedicated attended. A serious illness to Fr. Morris obliged him to retire in July 1949.

The Rev. Hartley Brown took up his ministry in November 1949, and under his leadership St. Stephen's took up a fresh challenge. Parish work both spiritually and socially was soon extended, and a succession of five Assistant Priests brought about the development of both Junior and Senior Companions, Young Wives, Drama Club and the Guild of St. Stephen. Such were the talents of the Rev A Parker (Asst Priest) that he completely rewired the electrical installation in the Parish Hall. In Centenary year (1962), a new Screen was erected to the memory of Frs. Ford and Morris. The year saw also the first Ordination Service ever to be held in the Church.

The Church was built from designs by Preedy (well known Midland Church Architects) in what was known us "early Middle pointed" Gothic style, with a few foreign features such as square abaci with bold floriated capitals in the nave arcades. The Nave is of four bays with pillars and arches of grey and red sandstone alternately with Bath stone insertions for the larger windows. The shape of the pillars is round and octagonal alternately. The large square Font is of alabaster whilst the full size Altar has a marble slab top. The total cost (including endowment) was £7,500 and was intended to seat 550 people!
The most significant alteration to the original structure was the construction of the Lady Chapel. A building fund towards this was set up as part of the Jubilee celebrations in 1912. Despite the difficulties arising from the outbreak of war, it was still possible for the work to be set in hand, and on March 5th 1916 the Archdeacon of Worcester dedicated the new Chapel to the glory of God and in honour of the Blessed Virgin Mary and St. Wulstan.
The three glass lights set in the main East window are to the memory of Jane Lavender "who founded this church and died while it was building". An original light depicting St. John the Baptist was relocated to the Lady Chapel upon its construction. The Chapel also incorporates windows dedicated to the memory of members of the Stallard family who fell during the Great War.
The Lady Chapel is a place for quiet prayer and reflection. It celebrated The Annunciation, St. Michael and St John The Baptist. The carved wooden entrance arch from the main church to the Lady Chapel is a point of interest. Note the right hand upright of the arch - look out for the 'secret' animal carved by the carpenter as a different way to finish the arch midway down the wall.
Outside in the church yard, The War Memorial Calvary in the Churchyard was unveiled by Mrs HW Spreckley (whose three sons fell in the war and in whose memory a chalice and paten were given) and dedicated on Sunday October 5th, 1919. 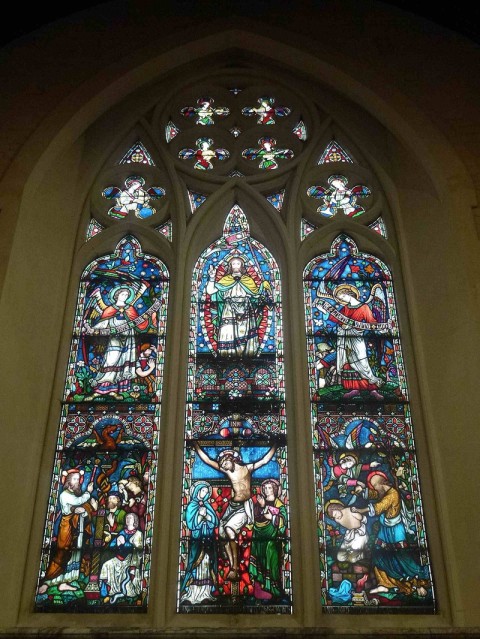